If there’s one thing that Southern comfort food is known for, it’s variety. From Texas to Georgia to the Carolinas, each state has its own unique take on this type of cuisine. In this blog post, we’ll explore some of the most popular comfort foods from the South, and we’ll give you tips on how to make them at home!

Southern Comfort Food You Should Try

Chicken fried steak is a popular dish in Texas, and it’s made by coating a steak in flour and then frying it. The result is a crunchy, flavorful piece of meat that goes perfectly with mashed potatoes or rice.

To make this, you’ll need to start with a tender steak. We recommend using sirloin or ribeye for this dish. Once you’ve chosen your steak, cut it into thin strips and season it with salt, pepper, and other spices.

Next, coat the strips in flour, and then fry them in a hot skillet until they’re golden brown. Serve your chicken fried steak with mashed potatoes and gravy, and you’ll have a delicious meal that the whole family will enjoy!

Fried green tomatoes are a popular dish in the South, and they’re often served as an appetizer or side dish. Green tomatoes are coated in a mixture of cornmeal and flour and then fried until they’re crispy on the outside and juicy on the inside.

Southern fried chicken is classic comfort food that’s popular throughout the South. This dish is made by coating chicken in a mixture of flour, spices, and buttermilk and then frying it until it’s golden brown and crispy.

To make Southern fried chicken, start by mixing flour, salt, pepper, and other spices. Then, dip the chicken pieces in buttermilk and coat them in the flour mixture. Once all of the chicken is covered, heat some oil in a frying pan and cook it until it’s golden brown and cooked through. Serve with hot sauce or your favorite dipping!

Cheddar cheese grits can be made by cooking grits according to the package directions. After these, it is stirred in some shredded cheddar cheese and then seasoned with salt and pepper.

Buttery cornbread is a quintessentially Southern staple cuisine, and it’s made by combining cornmeal, flour, sugar, butter, and eggs. This simple recipe results in a delicious and moist piece of bread that goes great with any meal.

To make buttery cornbread, start by mixing cornmeal, flour, sugar, salt, and baking powder. Whisk together eggs and milk in a separate bowl, and then add melted butter to the mixture.

Pour the wet ingredients into the dry ingredients and stir until everything is combined. Then, bake the cornbread in a preheated oven until golden brown. Serve warm with butter or honey.

Mac and cheese is a popular dish in many parts of the country, but it is especially beloved in the South. This creamy and cheesy dish combines macaroni noodles with a rich cheese sauce. It’s simple to make and sure to please everyone at the table.

To create mac and cheese, start by cooking macaroni noodles according to the package directions. While the pasta is cooking, prepare the cheese sauce by melting butter in a pot and stirring in the flour.

Once the flour is combined, slowly add milk while whisking continually. Add salt and pepper to taste, then stir in some shredded cheese. Drain the pasta and add them to the pot with the cheese sauce. Stir until everything is combined, and then serve hot.

Mashed potatoes are a portion of classic comfort food that’s popular worldwide. This dish is made by boiling potatoes and then mashing them with butter, milk, and seasonings. Mashed potatoes can be served as a side dish or as a main course, and they’re sure to please everyone at the table.

Pimento cheese is a cherished spread in the south. It’s made by combining shredded cheddar cheese, diced pimentos, mayonnaise, and spices. Pimento cheese is delicious on crackers or bread, making a great party snack.

To make pimento cheese, start by mixing shredded cheddar cheese, diced pimentos, mayonnaise, and spices. Serve crackers or bread, or use it as a dip for vegetables. Enjoy!

Banana pudding is a dessert that’s popular in the South. It’s made by layering bananas, vanilla wafers, and pudding. Banana pudding can be served as is or with whipped cream on top.

Start by layering bananas, vanilla wafers, and pudding to make banana pudding. Then, top with whipped cream, if desired. Serve immediately or store in the fridge for later. Enjoy!

Country ham is a type of cured ham popular in the Southern United States. It’s made by curing ham with salt, sugar, and spices. Country ham is often served sliced and fried, and it makes a delicious addition to any meal.

To make country ham, start by curing ham with salt, sugar, and spices. Then, slice and fry the ham. Serve with biscuits or as an addition to any meal. Enjoy!

Cube steak is a type of beef popular in the Southern United States. It’s made by tenderizing beef with a meat mallet. Cube steak can be pan-fried, grilled, or baked, and it goes well with sausage gravy or sauce.

Grits are a popular type of porridge in the Southern United States. They’re made by cooking ground cornmeal in water or milk. Grits can be served plain or with butter, cheese, or gravy.

To make grits, start by cooking ground cornmeal in water or milk. Then, mix in butter, cheese, or gravy, if desired. Serve immediately.

This cake gets its name from the buttermilk used in the batter. Buttermilk pound cake is a moist and delicious dessert perfect for any occasion.

To make buttermilk pound cake, start mixing flour, sugar, baking powder, salt, and butter. In a separate bowl, whisk together eggs and buttermilk. Add the wet ingredients to the dry ingredients and mix until everything is combined. Pour the batter into a greased and floured cake pan and bake at 350 degrees for about 45 minutes. Let the cake cool before serving. 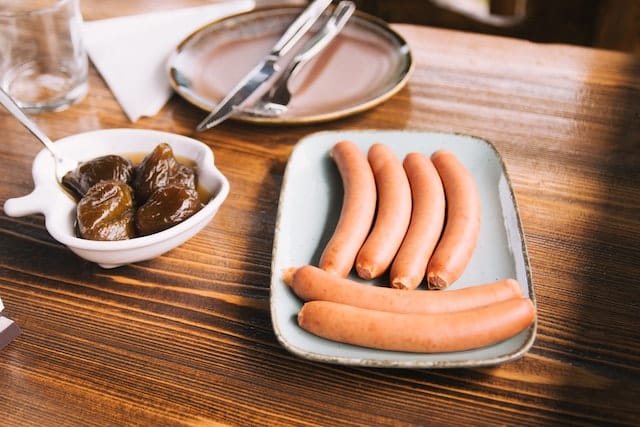 This is a type of smoked sausage often used in gumbo or jambalaya, and it makes a great addition to any meal. It’s made with pork, garlic, and spices.

To make andouille sausage, start by mixing pork, garlic, and spices together. Roll the ingredients until it forms a sausage, then smoke over low heat for several hours. Once it is done, slice and serve with gumbo or jambalaya, or enjoy as is.

No southern meal is complete without some collard greens! They’re often cooked with bacon, onions, and vinegar.

Buttermilk biscuits are made by mixing together flour, salt, baking powder, sugar, butter, and buttermilk.

After this, roll out the dough and use a biscuit cutter to cut out biscuits. Place the biscuits on a baking sheet and bake at 425 degrees for about 12 minutes. Once done, remove your biscuits from the oven and let them cool.

Chicken pot pie is a type of pie made with a chicken and vegetable filling and a biscuit or pastry crust. Chicken pot pie can be served with a side of mashed potatoes or green beans.

To make chicken pot pie, start by mixing chicken, vegetables, and gravy. Pour the mixture into an unbaked pie crust and bake at 375 degrees for about 45 minutes. Let the pie cool before serving. Serve with mashed potatoes or green beans on the side. Enjoy!

This casserole type is made with sweet potatoes, sugar, butter, and marshmallows. Sweet potato casserole can be served as a side dish or dessert.

To make sweet potato casserole, start by mixing cooked sweet potatoes, sugar, and spices. Then, top with marshmallows or pecans. Bake at 350 degrees for about 30 minutes. Let the casserole cool before serving. Enjoy!

This is a type of stew made with chicken, vegetables like lima beans and corn, and some barbecue sauce. Brunswick stew can be served as is or with rice on the side.

To make Brunswick stew, start by mixing chicken, vegetables, and barbecue sauce in a large oven. Then, cook the stew until everything is heated. Serve with rice on the side, if desired. Enjoy!

This dessert pie made with a sugar and syrup filling and a pecan crust. Pecan pie can be served with whipped cream or ice cream on top.

To make pecan pie, start mixing sugar, syrup, and pecans. Pour the mixture into an unbaked pie crust and bake at 375 degrees for about 45 minutes. Let the pie cool before serving. Serve with whipped cream or ice cream on top.

This southern meal is usually made with black-eyed peas, bacon, and onions. The black-eyed peas are cooked in water until they’re soft, then the bacon and onions are added to the pot. Simmer for about 45 minutes. After this, the dish is ready to be served.

Pork chops are a type of meat popular in the Southern United States. They’re made by cooking pork chops with oil, butter, or bacon fat in a pan. Pork chops can be served with gravy or sauce on top.

Fried catfish is a fish you cook by coating catfish filets in a mixture of flour, cornmeal, and spices before frying them in hot oil. Fried catfish can be served with tartar sauce or hushpuppies on the side.

Sweet tea is a type of tea that’s popular in the Southern United States. To make sweet tea, start by brewing tea. Then, add sugar and stir until it’s dissolved. Serve over ice, and enjoy!

The dishes listed above are some of the best Southern comfort foods. Whether you’re looking for something to eat as a main dish or brunch, there’s sure to be something that will hit the spot. And, if you’re looking for a beverage to wash it all down, sweet tea is the way to go. So, next time you’re in the mood for some comfort food, give one of these comfort food recipes a try! You won’t be disappointed. Or if you don’t feel like cooking and want to eat out for a good meal, Chocolate Martini Bar has you covered! Thanks for reading!

Located in the Savannah historic district, River Street comes alive during the holidays! From Thanksgiving to New Year's Eve, the historic River Street turns into a festive wonderland with string lights, decorated trees, and holiday cheer around every corner. River...

Think you know a lot about random topics? Welcome to trivia night. Trivia nights are becoming increasingly popular at restaurants and pubs across the country, and for a good reason. They're a great way to test your knowledge and have some fun with friends or family....

When one thinks of winter, thoughts of hot chocolate come to mind. Hot chocolate is a beverage that has been around for centuries. It is said that Christopher Columbus discovered it on his travels to the new world. There are many variations of this drink, but all...